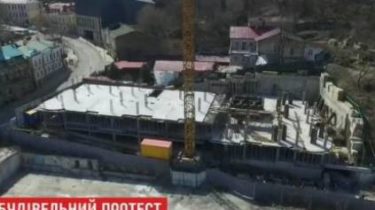 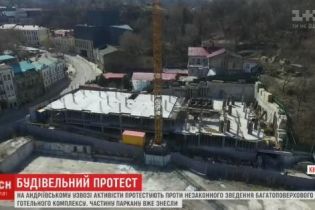 According to the decisions of the responsible authorities, the construction is illegal.

Today, April 11, workers of KP “Kievblagoustroystvo” dismantle the fence around the building, which is not the first year under the ban, the correspondent of TSN.

Morning under construction held a protest, during which activists broke into the building and tried to disassemble at least the fence, and climbed on a construction crane, stands on the construction site.

Activists showed reporters documents that the construction of multi-storey hotel illegal violations relate to and squatting on the land for construction, and violations rise as on the descent you can not build buildings higher than three floors. Besides because of this construction caused a shift in the soil, which has caused cracks in other houses.

The dismantling of the fence is under the supervision of activists, will continue to dismantle the equipment – decide.

“At the moment, will be to dismantle a fence. Regarding applications, it is necessary to calculate the cost of the work to dismantle a crane”, – said the Deputy Director of Department of an accomplishment of Kiev Taras Panty.

Protest against the construction of Andrew’s descent