The building of “Kyivmiskbud” fired from a grenade launcher 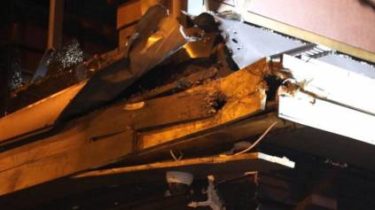 The building of “Kyivmiskbud” fired from a grenade launcher

Shot barrel grenade launcher lies across the street from the building.

The building of”Kyivmiskbud” in the Pechersk district of the capital fired an anti-tank grenade launcher. The incident occurred on April 13 about two in the morning.

The projectile landed in the sales Department of “Kievgorstroy”. Shot barrel grenade launcher lies across the street from the building. It cut down numbers, so the origin of the grenade launcher cannot be set.

At the scene police work.

In the Pechersk police station of Kiev confirmed the explosion in the street Emelyanovich-Pavlenko, where the building of “Kievgorstroy”. At the scene immediately went investigative team.

Smoke bombs and tear gas: “Kyivmiskbud” – collision due to construction on Svyatoshino

We will remind, last year the holding company “Kyivmiskbud” declared an armed attack on the Chairman of its Supervisory Board, Vladimir Slonca. The company, in particular, it was said that the attack occurred on 24 April 2017, about ten in the evening, when Sloncek returned home in Vasilkov. According to the “Kyivmiskbud”, car brand “Mercedes” first persecuted, and then started to block the movement of the machine top Manager of the company. During the movement of the unknown persons opened fire on the car of Konaka.

According to law enforcement, late in the evening April 24 the road from the capital to the town of Vasylkiv between the two road users had a conflict. The drivers were chasing each other and blocked the movement of vehicles. Subsequently, they arrived at the fire Department of Vasilkov city, where he staged a “dispute” with the weapon. One of the men opened fire from a carbine, which he heard the police protection, which was not far. The police arrived and calmed down the bullies and also called to the scene investigative team police.

It is noted that police found the parties to the conflict. One of them was Chairman of the Supervisory Board of public joint stock company “holding company “Kyivmiskbud” Volodymyr Konakom.

Videoproject “Azov” under the “Kyivmiskbud” has ended with security forces