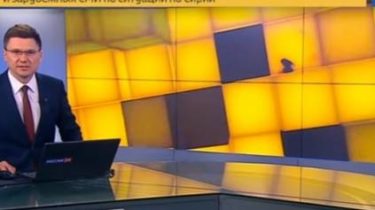 The attack on Syria became the main and only topic of the news for Russian TV channels.

Russian propaganda channel “Russia 24” in the plot about missile strike on Syria illustrated by the shelling of the Ukrainian Lugansk. Striking similarity of frames is noticed by the users of social networks.

In the story about Syria footage of the shelling of Lugansk go with 1:07 to 1:20 minutes.

Here is the original video, filmed in Luhansk in February 2015.

It is worth noting that on Saturday for all Russian TV channels attack on Syria became the main and only topic of the news. Some channels even changed the branch for broadcast of this event, says Meduza.

But a recent fire in a shopping centre, “Winter cherry” in Kemerovo not so impressed by the Russian journalists for this event, the channels have not changed the broadcasting schedule and the story about the fire was just one of many in the newsroom. Usually it was after the announcement of presidential election results.

We will remind, in the morning of 14 April, the US President Donald trump made an emergency statement that the armed forces of the United States, Britain and France bombed Syrian facilities associated with chemical weapons.

Later the New York Times, citing representatives of the UK Ministry of defence announced that the missile strikes were involved in four British fighter-bomber Panavia Tornadоreleased cruise missiles Storm Shadow to the object side near the city of HOMS, where, presumably, secretly stored chemical weapons.

Damascus has already stated that these missile strikes against Syria are a blatant violation of international laws. But state television said that the Western media greatly exaggerate the results night of air strikes. It showed the appeal of the Ministry of information of the country in which citizens are encouraged to “pay no attention to any media reports”.

Russia’s Ambassador to the U.S. Anatoly Antonov said that the attack on the United States, France and Britain against targets in Syria will not remain without consequences, the responsibility for them lies with the three countries.

Videossa, Britain and France launched air strikes on strategic targets of Assad and Russia in Syria

Planes and missiles in the night attacked three targets near Damascus and HOMS, all three it is research institutes which are associated with the program is the creation of chemical weapons. So the United States, Britain and France said the Syrian dictator in the Kremlin on the chemical attack of the city Duma, which killed 70 and poisoned five hundred people. 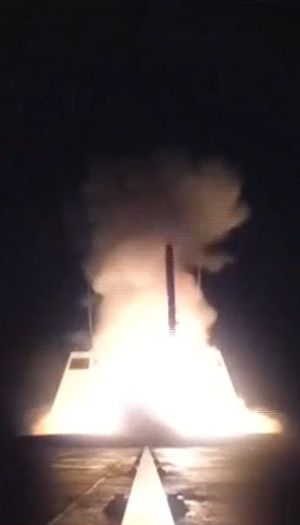