The militants disrupted the breeding of forces in the village of the Luhansk, firing positions of the Ukrainian military 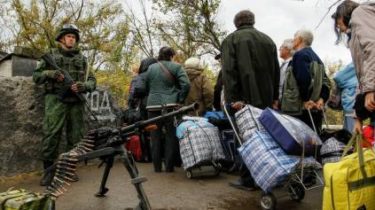 The militants disrupted the breeding of forces in the village of the Luhansk, firing positions of the Ukrainian military

Militants in the Donbas once again disrupted the breeding of the troops in the Village of Lugansk.

“The Ukrainian side of the JCCC informs that Russian militants and the occupation forces continue to violate ceasefire along the area of the withdrawal of forces and means of the parties in the area of the settlement the Village Lugansk. To scheduled for 20 April, the dilution of forces and means has not occurred, the militants fired at the Ukrainian positions from heavy machine guns”, – stated in the message.

As noted, the incident was informed to the representatives of the OSCE SMM.

“The Ukrainian side of the JCCC emphasizes that because of the systematic violations of the occupiers of the requirements of the Minsk agreements for the second consecutive year breeding forces in this area is impossible”, – said at the headquarters of the

In turn, the Ukrainian side of the JCCC assured that units of the Armed Forces of Ukraine are ready to withdraw forces under the condition of strict implementation of the leaders of the “LDNR” requirements of the Framework decision concerning the withdrawal of forces and means on the demarcation line.

Published by the Press center of staff ATO 17 APR 2018

Earlier, the terrorists of illegal armed formations “LPR” in the Donbas spread fake news about the shelling of the Ukrainian military ceremonial equipment of terrorists. The militants said about the destruction of military equipment, which needs to participate in the parade of terrorists on 9 may.