During attacks of militants in the Donbas were injured Ukrainian soldier. Chronicle of the ATO 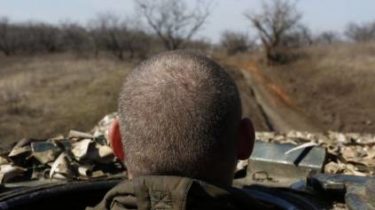 During attacks of militants in the Donbas were injured Ukrainian soldier. Chronicle of the ATO

For Wednesday, April 18, in the area of ATO in the Donbas the militants carried out 20 attacks.

“As a result of enemy fire, one Ukrainian soldier was wounded. He was taken to the hospital and he received qualified medical aid”, – stated in the summary of the press center of staff ATO.

In Donetsk direction of the Minsk agreements prohibited the 120-mm and 82-mm mortars, grenade launchers, heavy machine guns and small arms fighters fired at the defenders of the mine Butovka. 82-mm mortars, grenade launchers, heavy machine guns and sniper weapons they used in close proximity to the Sands. Also rocket-propelled grenades opened fire on the defenders of the Water, Talakovki, Bogdanovka and Avdeevka. In addition, from APCS, militants fired Ukrainian fortifications under Bogdanovka, from heavy machine guns near Nevel and Talakovki, small arms in the district Lebedinsky, Marinka, Avdeevka and Verhnetoretskogo, and nearby Gotovogo – sniper fire was conducted.

At the Luhansk direction militants used heavy machine guns on the Ukrainian positions under Novoluganskoe, and sniper weapons near Mayorsk and Novgorod.