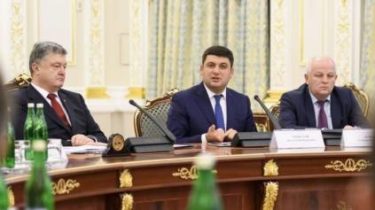 Among the key issues – the autocephaly of the Church and the establishment of cooperation of the Parliament, President and Cabinet.

The President of Ukraine Petro Poroshenko in the evening of 17 April he held a closed meeting with members of the Cabinet. Talked about sanctions against Russia, closer cooperation between government, Parliament, the President, the creation of a single local Orthodox Church.

This was stated by the Minister of education and science, Liliya Hrynevych, “Interfax-Ukraine”.

“We talked about several issues, starting with Ukrainian local Church. Informed the us President about the results of his meeting (April 9, with the Ecumenical Patriarch Bartholomew) in Istanbul, as it is a very important event,” – said Grinevich.

Among the issues discussed, the interaction between the President, the Cabinet and the Verkhovna Rada “in these difficult times, challenges that we now face. A lot of calls. We’ve had two years of government work, there is something to think about. But the next period is also set ourselves challenges.”

Discussed questions of the introduction of Ukraine sanctions similar to those imposed by the US.

“We also discussed the issue of sanctions. Now the government is preparing the project, conducting coordination, many meetings. We are working on this important document, which after publication will merit special attention of media,” the Minister said.