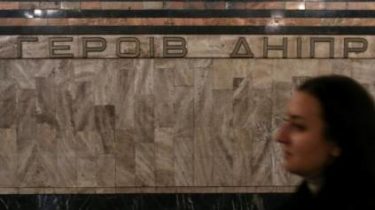 Close to the subway lead the construction work.

In Kiev at the metro station “Heroes of Dnepr” from April 21 will temporarily close the North vestibule.

About it reports a press-service of the Kiev subway on Twitter.

As noted, the lobby will be closed due to construction works near the station.

In turn, in the metro assured that the construction of the Mall is quite safe, but people are totally against it and demand to stop construction work. Activists have blocked traffic and tried to attract the attention of the Kiev authorities to this problem.

The mayor of Kiev Vitali Klitschko said that work on the “Heroes of Dnepr” are planned and aimed at strengthening the subway station and promises that , without the consent of Kiev nothing will build.