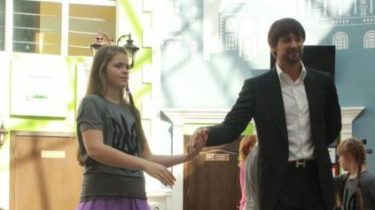 Also known athletes have provided items for the charity auction.

This Saturday, April 21, at city hall, will host the annual Charity Viennese ball – it is dedicated to sporting achievements, as it is held on the eve of the final of the Champions League in Kiev.

Ball 2018, according to Viennese tradition, will open 35 pairs of debutants, among which this year is the ATO participants, artists, athletes, actors and singers.

The leitmotif of the ball in Kiev will sound the anthem of the UEFA and decoration of the sports theme will be football gallop with the participation of famous Ukrainian players.

Guests will enjoy the singing of the soloists of the Vienna Opera Christian Dreher and the Ukrainian National Opera Susanna Chakhoyan, as well as young Opera singers Miriam Rawashdeh and Alexander Upatov. Gala concert of the famous Ukrainian composer, pianist-virtuoso Yevhen Khmara will be a real gift for fans of refined classics.

As in every Viennese ball in the world, in Kiev will host a charity auction, it has provided lots of famous athletes Elina Svitolina, Andriy Shevchenko and Oleksandr Shovkovskiy , and many others. Going under the hammer and Boxing gloves Kyiv mayor Vitali Klitschko, who last year were at the ball the most expensive lot.

Proceeds from the charity auction will go to the programs of the Moscow center of rehabilitation of children with disabilities.

Menu of the ball will be the Grand Symphony of a combination of Ukrainian and Austrian traditions.

In addition, famous Ukrainian chokolade Valentin shtefanyo directly at the ball will create a unique masterpiece of chocolate, this artwork will spend 15 pounds of chocolate, and get it to one of the guests at a charity auction.

Recall the Champions League final will be held in Kiev on may 26 at the NSC Olimpiyskyi. The women’s team will compete in the Champions Cup on may 24 at the stadium of Lobanovsky.