Two of the wounded soldiers in the Donbas. A day in the area ATO 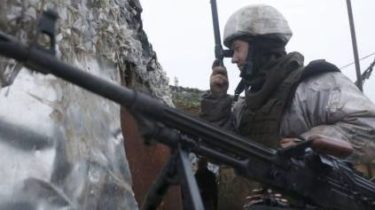 Two of the wounded soldiers in the Donbas. A day in the area ATO

“Easter truce” in the Donbas ended before it even started

For the past day the militants of 35 times fired at positions Armed forces of Ukraine. Two Ukrainian soldiers were injured.

The fire erupted war. Why in the Donbass began worsening on all fronts

In particular, at the Donetsk direction of the prohibited 120 mm mortars militants fired on the Ukrainian fortifications in the Sand and Experienced. Also in areas of Sands and Avdiivka fired 82-mm mortars. rocket-propelled grenades, heavy machine guns and small arms was fired at Ukrainian strongholds near the Mine Butovka, Water, Avdeevka, Lebedinsky and the Heater. In addition, the terrorists used small arms near the area of Mariinka, Food and Hnutove.

The construction of the Press center of the ATO headquarters during the day, 19 April 2018, over the past day the Russian occupation troops 35 times…

Posted by the Press center of staff ATO on Thursday, April 19, 2018

On Lugansk the direction from rocket-propelled grenades, the militants opened fire on Ukrainian positions near settlements the Village Lugansk, may and Artem.

Earlier in Minsk during a meeting of the Trilateral contact group stated that “Easter truce” in the Donbas ended before it even started. Over the past two weeks, from 30 March to 16 April, militants carried out attacks 720, 685 of which were aimed.