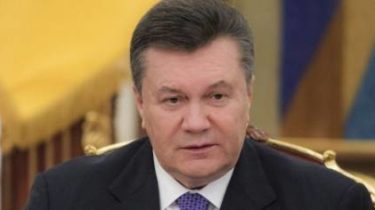 The fugitive appealed to Ukrainians and accused the current government in the delivery of the Crimea and the shooting of the Heavenly hundred.

Stripped of the title of President of Ukraine, the fugitive Viktor Yanukovych wrote an open letter-appeal to the Ukrainians, which commented on trial.

The letter was made public by the press Secretary Oleksandr Yanukovych Yuri Cuirassiers.

“Obolon court issued an illegal decision on the conclusion of the trial proceedings and move on to the debate. This shows that in this process the judge was known before the start of the case and appointed those who agreed to serve their masters, Lutsenko and Poroshenko”, – the statement says Yanukovych.

According to the fugitive, the court in a hurry, because “the truth spoken by the witnesses in the case, can greatly affect the results of early parliamentary elections, which Poroshenko and his entourage are dreaming to appoint themselves as winners.”

Besides, he expressed dissatisfaction with the fact that from the statement his lawyers witnesses questioned only two of the Crimean people and three high-ranking officials: former Minister of foreign Affairs Leonid Kozhara, former head of the Kharkiv regional state administration Mikhail Dobkin and the former chief of the General staff Yuri Ilyin.

“The court is satisfied that the testimony of others – the head of presidential Administration Andrey Klyuev, head of the SBU Alexander Yakimenko, the interior Minister Vitaly Zakharchenko, commander of internal troops Stanislav Shulyak and other witnesses, will completely destroy the trumped-up charges,” wrote Yanukovych (these persons are former high-ranking officials and are wanted – approx.ed.).

In addition, the fugitive said that the current regime is based on false stories and myths about the “peaceful independence”, the “bloody dictator” and “separatists of Donbass”.

“And the truth is that for the sake of their own power these criminals first shot Heavenly hundred, and then got rid of unnecessary Crimea, and then shed the blood of thousands of Ukrainians on Donbass – the region that did not recognize them. What is happening in the country – the agony of the current regime. It is their animal fear of imminent collapse. They understand that, losing power, they will stand not before the court, and before the anger of the Ukrainian people,” Yanukovych summed up. 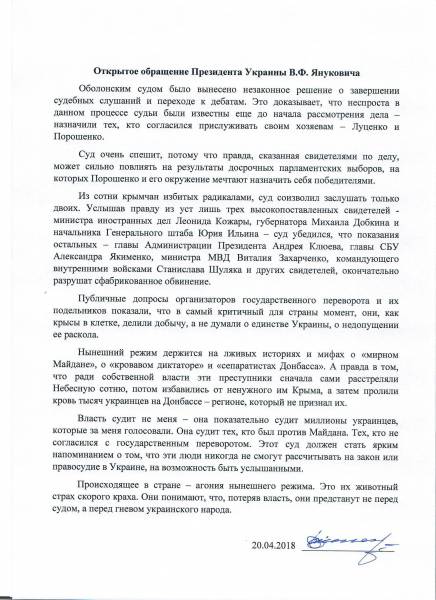