About fifty attacks per day. On Donbass the Ukrainian military was lost 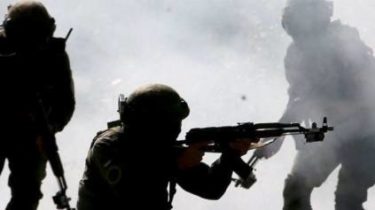 About fifty attacks per day. On Donbass the Ukrainian military was lost

Lately not a day goes by without casualties on the Ukrainian side.

For the past day on 21 April the Russian occupation troops have carried out 47 attacks positions of the Ukrainian military, using Minsk agreements prohibited weapon.

In particular, at the Donetsk direction of the prohibited 120 mm mortars and arms of tanks, the militants fired at our strong points in Pavlopol and the Food industry worker, according to the summary of the press center of staff ATO.

Also mortars of caliber of 120 mm, the aggressor used by defenders of the Water and Novotroitsk, grenade launchers and small arms near Avdeevka, Heaters, Gotovogo Verhnetoretskogo, Water, Lomachenko and Nevel, heavy machine guns – near the Food, Novotroitsk, Chernenko, Gotovogo and Talakovki. In addition, under Talakovka and Pavlopol the aggressor has used infantry fighting vehicles, small arms – near Marinka, Krasnogorovka, Lebedinsky, Shyrokine and the mine Butovka, and the defenders Pavlopolya and Novotroitsk sniper fire was conducted.

At the direction of Lugansk prohibited 120 mm mortars, the enemy used at the Ukrainian positions near Novoaleksandrovka, Katerinovka and Zaytsevy. From 82-mm mortars, the fire was on the Crimean Oborona, Novoselovka, Luhansk, Novgorod and Zaytsevy. Also under fire from rocket-propelled grenades of different systems and small arms were the strengthening of anti-terrorist operation forces in the Crimean and Luhansk, rocket – propelled grenades- near Zaytsevy and heavy machine guns and small arms – under Novoselsky.

In the fighting one defender of Ukraine died. Two soldiers were injured, two others received a combat injury. The victims were sent to hospitals, they received the necessary medical assistance.