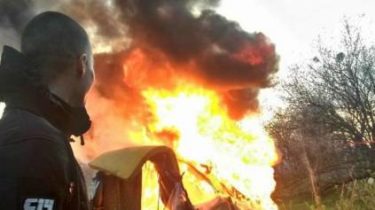 Activists plan to continue the raids against the illegal settlement of the Roma.

In the historical part of Kiev on the Bald mountain, activists C14 dismantled and burned the camp of Roma who live there in a long time.

About it on the page in Facebook reported one of the activists Sergey Mazur.

On the eve of the Roma were warned that their place of residence in the historic area should leave, but first, not all met the condition.

“But after convincing legal arguments the others decided to leave prohibited areas. We removed them almost all the debris, dismantled tents and safely burned,” writes Mazur.

…Qi EN on Bald mountain is no more. Yesterday they did not fulfill the requirement, only part of the left camp in the Park. But after…

He added that it now remains only to return the territory of Bald mountain to its original appearance. It should deal with service improvement.

Crush and broken door. Activists disrupted a city Council session because of the scandalous building on Andreevsky Spusk

Activists are going to organize next week the new raids against illegal rozselennya ROMs.

Recall that in February representatives of the Ukrainian nationalist organization C14, “Right sector”, “Tradition and order” hindered the work of the Russian center of culture and science in Kiev.