Ukraine participated in a special meeting “the Big seven” in Canada 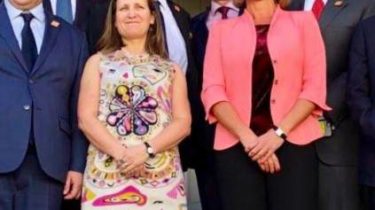 Ukraine participated in a special meeting “the Big seven” in Canada

The foreign Ministers of the G7 countries discussed the situation in the Donbass and reforms in Ukraine.

For the first time Ukraine participated in the events of “the Big Seven”. April 22 in Toronto, Canada held a special meeting on the situation in Ukraine. It was attended by the Minister of foreign Affairs Pavlo Klimkin.

The foreign Ministers of the G7 countries and Klimkin discussed “issues relating to the new challenges of hybrid Russian aggression, the need for preservation of sovereignty and restoration of territorial integrity of our state, maintaining sanctions pressure on Russia and support of reforms in Ukraine”, said the Ukrainian foreign Ministry.

Also, a question was raised about the prospects for a peacekeeping mission in the Donbas.

“Ukraine is perceived as an integral part of the free world, a common democratic space. Our partners from the group of seven attack on Ukraine see as an attack on the free democratic world,” – said Pavlo Klimkin.

Earlier it was reported that the Minister of foreign Affairs of Ukraine for the first time invited to the meeting of foreign Ministers of the group of seven. Ambassador of Ukraine to Canada Andriy Shevchenko confirmed that the Minister of foreign Affairs of Ukraine Pavlo Klimkin received the invitation to the meeting from his colleagues of the canadian Minister of Christ, Freeland. Ukraine hopes that this conversation will continue at the upcoming summit of the leaders of the G7 which will take place in June in the canadian region of Charlevoix, noted Shevchenko.