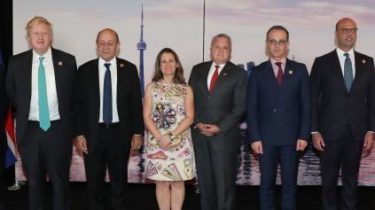 The foreign Ministers of the G7 held speczadanie in Ukraine © Reuters

About it the speech went at the meeting of foreign Ministers of the G7, which was attended by Klimkin.

Countries “Big seven” supported the extension of sanctions against Russia for its actions in Ukraine. This was reported in Twitter of the foreign Ministry of Canada.

“The Minister Freeland and other foreign Ministers of the G7 countries reaffirmed the common respect a world order based on international law, including the issue of territorial integrity. Sanctions against Russia for its unacceptable actions in Ukraine will continue”, – stated in the message.

Minister Freeland and #G7 Foreign Ministers reaffirmed our shared respect for the rules-based international order, including territorial on #sovereignty. Sanctions imposed on #Russia following its actions in ending #Ukraine will continue. pic.twitter.com/f6n9sQ6MkS

“Discussing the format of the peacekeeping operation all agreed that we must be guided by logic, when first achieved basic safety (heavy weapons should not work and strictly monitored), then the control over the occupied territories, a police component and then preparations for the elections”, – quotes klimkina UKRINFORM.

As you know, for the first time Ukraine participated in the events of “the Big Seven”. April 22 in Toronto, Canada held a special meeting on the situation in Ukraine. It was attended by the Minister of foreign Affairs Pavlo Klimkin.

The foreign Ministers of the G7 countries and Klimkin discussed “issues relating to the new challenges of hybrid Russian aggression, the need for preservation of sovereignty and restoration of territorial integrity of our state, maintaining sanctions pressure on Russia and support Ukraine’s reform”.