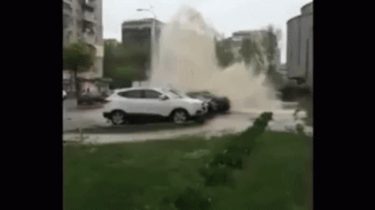 Assure that urged not to use the site, which had a test network.

The geyser in the centre of the capital. At least seven cars filled with water and covered with stones on Solomenskaya street in Kyiv, reported by TSN.16.45.

Broken Windows, peeling paint. Wet salons. The loss of tens of thousands of hryvnia. Burst pipe heating. While the drivers talk, how to knock out “Kyivenergo” compensation, the company said that warned about the tests of heating systems. It was not necessary to leave there the car.

Fountain with a height of ten meters saw everyone who was driving down the street in Solomensky 10.40.

“Honda” stood in the midst. The pavement under her wheels flew twenty meters, so the window is broken. But the owner is afraid of the other surge of the engine.

“The fountain was partially blocked in the bottom of my car. Accordingly, the blow and its consequences can only be assessed one HUNDRED. Naturally, you need a tow truck,” says the owner of the car.

The neighboring “Hyundaya” damage is the paint. But this is only on the outside. And inside – full of water.

In Kiev, the car fell into a communal “geyser”

Police have issued six reports. Suitable seventh driver. On-site representative of the Solomenskiy district administration. And it is not responsible for the pipe. Anatoly Tkach rescue. Says that broke through the heating duct diameter of 400 millimeters. And residents about the danger seems to be warned.

“Hydraulic tests of thermal networks. The tests are carried out, are warnings. The owners of the territory. As for my opinion, operationalise and this stoyanochku,” says the lifeguard.

No ads seen. Verbal reservations are not heard, say the owners. The majority of victims have auto insurance. And they still agree with each other. It may be possible to sue “Kyivenergo” whose pipe burst.

The company “Kyivenergo” acknowledged the damage to three cars. And promised to compensate the damages: “in accordance with legislation right.” But the SUV waiting for the crane. Because they were above the pit, which at any time may collapse.