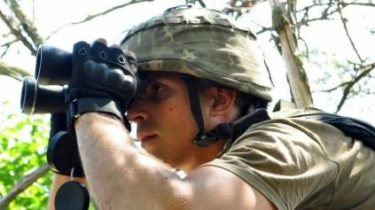 Information about the victims of the Ukrainian military there.

For Tuesday, April 24, in the area of ATO in the Donbas the militants 69 times opened fire on positions of Ukrainian Armed forces, using prohibited weapons Minsk agreement.

“As a result of the execution of combat missions, nine Ukrainian soldiers were injured. Two of our defenders got a combat injury. Injured servicemen were taken to medical institutions and provided them with all necessary medical care”, – stated in the summary of the press center of staff ATO.

In Donetsk direction of the 122-mm artillery, 120-mm and 82-mm mortars and rocket-propelled grenades, the militants fired at the Ukrainian positions in the area Lomachenko. Also 120-mm mortars – used by defenders of the Water, Novotroitsk, Gotovogo and Food, and mortars of caliber of 82 mm – in the area of Shirokino and Water. Rocket-propelled grenades, the militants opened fire on the fortifications of the ATO forces near Lebedinsky, Talakovki, Avdeevka, Gotovogo, Marinka and Food industry workers, from heavy machine guns near Pavlopolya, day, Krasnogorovka and the mine Butovka, BMP – near Water, Food and Gotovogo, and from small arms – near Kamenka, Novomikhailovka, Avdeevka, Talakovki, Marinka and Water. Defenders of Talakovka, Pavlopol and Shirokino were fired on by snipers.

On Lugansk the direction of the 122-mm artillery and has 120-mm and 82-mm mortars, grenade launchers and heavy machine guns, the militants fired at the Ukrainian positions under Lugansk. Also 120-mm and 82-mm mortars fighters used by defenders Novoluganskogo and Trinity. From 82-mm mortars was fired on the Ukrainian positions under the Novoselovka from the armament of the BMP – close proximity to the Crimean and the Trinity, rocket-propelled grenades – near Valuyskiy, heavy machine guns – near the Village Lugansk, Crimean and Novoselovka and sniper weapons under Novgorod.