In the Donbass were injured, five Ukrainian soldiers. Chronicle of the ATO 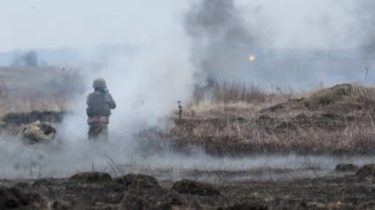 In the Donbass were injured, five Ukrainian soldiers. Chronicle of the ATO

On Thursday, gunmen 52 times opened fire on positions of Armed forces of Ukraine.

For April 26 in the area of ATO in the Donbas the militants have carried out 52 attacks on positions of forces ATO.

“As a result of enemy shelling, three Ukrainian soldiers were injured. Two of our defenders got a combat injury. The injured soldiers taken to hospitals and they were given qualified medical assistance”, – stated in the summary of the press center of staff ATO.

On Donetsk the direction from 120-mm mortars, as well as from APCS, grenade launchers and small arms fighters fired at the defenders of Novotroitsk. From 120-mm mortars and 82 mm heavy machine guns fired on the Ukrainian strongholds near Lebedinsky, from 82-mm mortars, grenade launchers and heavy machine guns – in Verkhnetoretsky, Sands, Krasnogorovka and the mine Butovka. In addition, grenades of different systems and small arms, the militants repeatedly used under the Avdeevka, Marinka, Water, Heater. Under fire from APCS were the defenders of the mine Butovka, from heavy machine guns – Nevel, Talakivka and Experienced small arms – defenders of Lomakino, Lebedinsky, Shirokino, Hnutove, Food technologist and Experienced, and near Novomikhailovka and Marinka sniper fire was conducted.

We will remind , on 30 April in the Donbas anti-terrorist operation is completed and starts operation of the United forces.