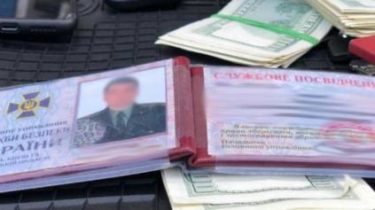 The official detained during receiving the second tranche in the amount of 36 thousand dollars.

National anti-corruption Bureau of Ukraine published the fragments of the investigative action to expose the security officer while receiving a bribe.

The corresponding video published a press-service of NABOO.

“Given the public outcry and in accordance with article 1 of the law of Ukraine “On the National anticorruption Bureau of Ukraine”, according to which the task of the NEB is the fight against criminal corruption offences that pose a threat to national security, the National Bureau publishes excerpts of declassified recordings made during the covert investigative (search) actions in the investigation of corruption in the sphere of migration policy”, – stated in the message.

We will remind, on April 24 in Kiev for a bribe at 47.5 thousand dollars caught SBU. Money the official received from the facilitators for the lack of accountability of persons who could receive a permanent or temporary residence on the territory of Ukraine illegally.

According to the head of the anti-corruption Bureau of Artem Sytnik, the bribe taker was captured during the second tranche in the amount of 36 thousand dollars, and during the arrest was discovered glasses of champagne, cartridges for rifled firearms and a substance that is “very similar to known drugs”.