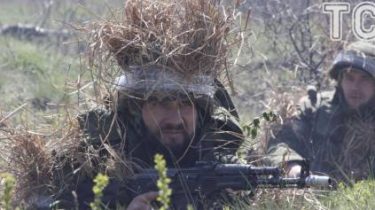 Two terrorists were killed and another one injured.

The Russian militants occupying troops in the Donbas tried to build a hidden warehouse of ammunition in their positions, there was an explosion. This was reported in the press center of staff ATO.

According to Ukrainian reconnaissance, the incident occurred due to neglect of rules of storing and handling ammunition and violations of the norms of fire safety.

“A powerful explosion occurred on April 27 and led to the partial destruction of the position of the death of two and wounding one militant. The magnitude of the destruction, and thus the size of the Arsenal, indicated by the fact that to establish the volume of damage fortification equipment the enemy used UAV”, – said in the text.

Published by the Press center of staff ATO 29 APR 2018

The staff reported that the militants arranged a warehouse of ammunition to the mortars, and various types of small arms, which was concealed from curators . Make use of these “caches” were able to resolve internecine squabbles, attacks on civilian infrastructure and for sale.

The responsibility for the explosion, the occupants shifted the forces of ATO – “elusive Ukrainian DRG”.

“It is obvious that such a justification did not suit the Russian curators. Upon the destruction of the positions assigned to another investigation, which is personally controlled by the commander 1 AK, which yesterday arrived at the scene,” – said the headquarters of ATO.

Earlier, militants occupied “DNR” Makeyevka Donetsk region near the building of the police, the bomb exploded. Information on victims did not arrive.