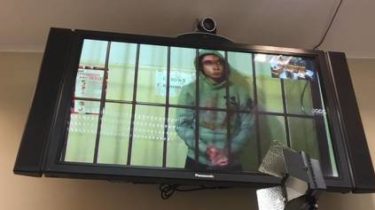 The judge gave the Consul and his mother to see a political prisoner.

Russian court in Krasnodar extended the arrest of 19-year-old Ukrainian Pavel Grib, who was abducted in Belarus and arrested on false charges. The prisoner will be in jail for at least another two months – until July 4.

This was reported by the boy’s father Igor Grib, reports Hromadske.

The court session was held on Saturday, April 28. It passed in the closed mode, therefore the judge, seeing the Ukrainian Consul and mother of Paul, asked them to leave the court room. Personal meeting with the son of the mother of the Fungus was not given.

Igor Grib said that for more than 8 months that his son is in a Russian prison, he was not allowed any visits with his mother. The family at that time received from him only one letter, Paul also received one email from a citizen of Ukraine.

Recall Paul the Fungus was lost on 24 August 2017 in Belarus. The guy went to the city of Gomel to a meeting with the girl, whom he met in social networks. It became known later that he is in the remand prison of the Russian city of Krasnodar. He began health problems, but the Ukrainian doctors, it has not made.

For a long time, it was unknown what suspect Paul, but later reported that the Fungus with a girl allegedly discussed the undermining of schools. Against a 19-year-old Paul Mushroom fabricate a case on false charges of planning a terrorist attack.

Father barred says the ban on Russian militiamen explained by the fact that the guy supposedly on a diet. However, according to the doctors, due to poor power condition is deteriorating Paul. And even saying the guy needed surgery.