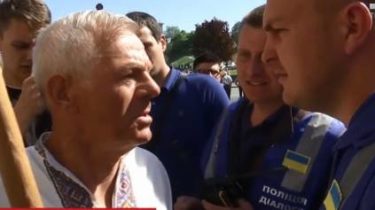 The procession he called Communist gatherings, and the police rebuked the betrayal of the country.

In Kiev the may day demonstration became the most mass action this day all over Ukraine. She came several hundred people, according to a story TSN.19:30.

The pensioners explained that though not working, labor day has come because they are bored at home. And pupils of sports schools have decided to simply show that they are regularly working in gyms for the sake of future victories in the competition. Marched through Khreshchatyk, but in her way stood a man with national flag in hands. Their action, he called the single picket against the Communist coven. “This is a betrayal of Ukraine, which allow the police,” he reproached militiamen. However, the activist has led the way, and the column moved on.

The March in the capital has gathered about two thousand people. Under political and Union flags, they marched through downtown. In the ranks of the retired and children, which Evropetsskie square waited for the improvised scene. But some of the participants have dispersed after the procession. 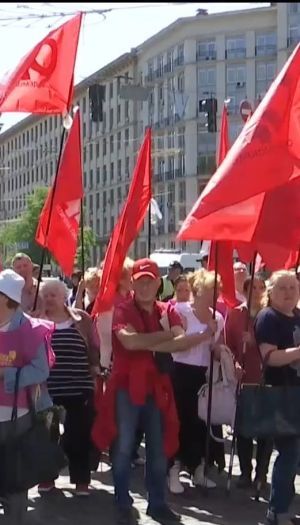 Behind the capital is in the European area appeared to have a soapbox under her, put posters with the basic requirements. They mixed with the philosophical arguments one after the other was announced by the Union leaders. Of the participants in the March speech from the stage did not listen to and immediately after the procession dispersed.

As previously reported, the demonstrations on may 1, said several thousand Ukrainians, mostly occurred in the East and South of the state. Traditionally, fans of the Communist past was met by representatives of nationalist organizations.