Anti-Semitism on the March of the nationalists: Odessa excited the remark of the leader of local “Right sector” 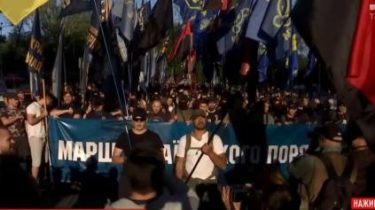 Anti-Semitism on the March of the nationalists: Odessa excited the remark of the leader of local “Right sector”

In a situation already dealt with law enforcement.

Scandal xenophobic tinge erupted in Odessa on the results of the Patriotic March on 2 may, when the downtown went through several hundred supporters of the “National body”, the “Right sector” and the party “Freedom”. An anti-Semitic remark of one of participants of procession that sounded from the stage, shocked the public and sparked heated debate, according to a story TSN.19:30.

The head of a local cell “Right sector” Tatiana Zaikinoj the microphone was given to the Cathedral square. She in her speech at the rally, said: “Ukraine belongs to Ukrainians, not Jews, not oligarchy. Glory To Ukraine!”. This performance was broadcast on social networks, it has garnered thousands of views and hundreds of comments. “There is a weird semi-literate girl, and the crowd of adult men it listens to and applauds,” the surprised nick.

Videoanalitika statement during the March activists in Odessa angered the public

Scandal xenophobic flavor erupted in Odessa. On the eve of the city marched several activists of the National corps of “Right sector” and the party “Freedom”. An anti-Semitic remark of one of participants of procession, sounded from the stage, stunned and aroused heated debate. 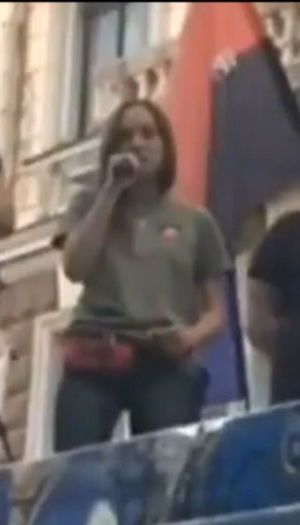 Soykina agreed to meet with reporters to explain his words. “I mean the involvement of certain oligarchic clans. Made these findings that people have to first explain what a “Jew” and what is a Jew, or more correctly to speak,” she said.

However, such explanations of disgruntled citizens not satisfied. Journalist and former Deputy head of the field Zoya Kazanzhi calls statements disgusting, regardless of the interpretations, because during the Maidan and the “Russian spring” Odessa was a real springboard for the testing of technologies to incite hatred, so the price of these replicas is very high. “This xenophobia, which is very cultivated politicians whom we saw yesterday, she definitely does not benefit anyone, including them, because it is impossible in the XXI century to live with such primeval views,” – said Kazanzhi.

Writer and psychiatrist Boris Kherson recognized that what was happening in the center of Odessa on the eve of his outraged. “One irresponsible statement 22-year-old woman negates the work of many people to build the image of our country, because such materials are multiplying with the speed of bacteria,” he explained.

Not happy with the situation and the Chairman of the Association of the Jews in the ghetto, Roman Shvartsman. “This behaviour is unacceptable. We are very painfully perceive,” said he.

In Ukraine unacceptable public anti-Semitic appeals. Including on mass actions, yesterday in Odessa. This is a cave in the middle ages, and not a Patriotic position. The Odessa police have registered proceedings under part 1 of article 161 of “Inciting racial, national equality of citizens”

In the Jewish organizations of Odessa are already preparing performance statements regarding soykino to the Prosecutor General and the interior Minister Arsen Avakov in his Twitter said that the police have already registered the production in fact anti-Semitic slogans. Soykino if fault will prove, to it threatens till five years of imprisonment.