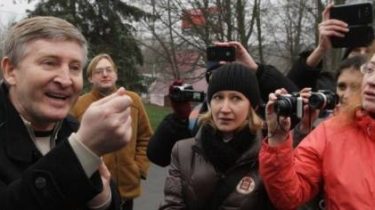 London’s high court ordered the tycoon to return the money for “Ukrtelecom”.

After losing in the High court in London by Rinat Akhmetov will have to pay for “Ukrtelecom”. If the richest Ukrainian will not pay 820 million dollars, he’s threatening to take away 44 percent of shares of “SCM”.

According to the decision taken on Thursday, 3 may, the High court in London, Rinat Akhmetov needs to return $ 760 million, underpaid for the purchased of 2013 “Ukrtelecom”, as well as $ 60 million accrued over several years of interest. Therefore, the court affirmed last year’s decision of the previous court – the International court of arbitration of London.

After losing Akhmetov must immediately pay the debt to the seller is a Cypriot company Raga Establishment, the beneficiary of which is a former banker Denis Gorbunenko. He, in turn, needs $ 300 million for “Ukrtelecom” his friend Dmitry Firtash. The latter also has a direct interest to collect the debt from Rinat Akhmetov.

With debts, and without the “Ukrtelecom”

Company SCM Financial Overseas Limited, which is part of Akhmetov’s holding company “System capital Management” (“SCM”), in the High court of London was required to direct a new trial in the London court of international arbitration (LCIA) case for the sale of “Ukrtelecom”. The main argument of the company Akhmetov was that the final decision cannot be taken until, until there is a final decision of the Ukrainian courts on the return of the Telecom giant in public ownership. In December 2017 the Kiev economic court of appeal upheld the first instance decision of re-privatization of “Ukrtelecom”. The reason – failure to comply with the obligations imposed on the buyer in the privatization of the company. The final decision should be taken by the court of appeals.

Thus, if the company Rinat Akhmetov finally lose the courts in Ukraine, the billionaire may lose “Ukrtelecom” and will be required to pay extra for it to Denis Gorbunenko and his partner, Dmitry Firtash. After the purchase of 2013, the Ukrainian monopolist of fixed communications Rinat Akhmetov paid only $ 100 million of the agreed 860 and stopped paying subsequent tranches, as soon as Dmitry Firtash was arrested in Vienna on request of the United States.

Commenting on the unsuccessful appeal in London, Director of international relations and investor relations “SCM” Jock Mendoza-Wilson called the court decisions unfair. “In evaluating the decisions of the Arbitral Tribunal on the merits, London’s High court came to the conclusion that the actions of the Arbitration court became the reason of substantial injustice” in relation to “SCM” due to the fact that the decision of the arbitrators could be very different if they had deferred a decision prior to the completion of court proceedings in the Ukrainian courts,” said Mendoza-Wilson in a statement released by the press service of “SCM”.

Holding Akhmetov noted that the debt dispute does not affect the business activities of the group “SCM” and its assets.

Not going to pay

To return the debt Gorbunenko Akhmetov and Firtash are obviously not going. “Our fight for the truth in the face of unjustified actions from the Raga is not finished – we will continue to actively defend its position,” said Jock Mendoza-Wilson in a statement.

But in Raga note that after the decision of the High court of London Akhmetov no more formal reasons to delay the return of the debt. “Arguments Rinat Akhmetov’s “SCM” has repeatedly been rejected by four courts in three different jurisdictions,” – said in Raga Establishment. Earlier Rinat Akhmetov unsuccessfully sued an anti-freeze in the matter of his assets in Cyprus and in the Netherlands.

The source DW, which represents the interests of Raga, on the condition of anonymity, said that the company Gorbunenko is ready to consider proposals of Rinat Akhmetov on the compromise settlement of the debt dispute. “It depends on how much money will be offered Akhmetov and Raga will be ready to make allowances,” said a source close to Denis Gorbunenko. But the source in management “SCM” rejected any informal negotiations. “We will not negotiate with them and will continue using the courts to respond to the egregious actions Raga”, – said the representative of Akhmetov’s holding company. He pointed out that “SCM” is hoping for success in the appellate courts of the Netherlands and Cyprus on the release of frozen in those countries assets.

If Rinat Akhmetov will not pay and will not sit at the negotiating table, threatening the source of DW close to Dmitry Gorbunenko and his partner, Dmitry Firtash, Raga will achieve in the courts the confiscation of frozen assets of the richest Ukrainians, including elite housing in London. However, obviously, the opponents Akhmetov aimed not at the apartment, and especially on the stock “SCM”: “In Ukraine, there will be many wanting to buy 44 percent of shares of SCM Group, which we will expose on auction in the event of forfeiture,” said the source. Time, note in a Raga, plays against Rinat Akhmetov: every day for a debt of 760 million, according to the decision of the London court, interest is added. At the moment the debt has already reached 820 million dollars.