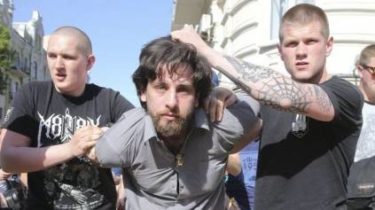 Everything depends on the procedural aspects, say security officials.

In the center of Kiev was caught and taken to the SBU Brazilian Donbass terrorists Raphael’s Lusvardi, which is similar to the South American series. In the fall of 2014 he came to Ukraine more than a year and fought in the so-called “DNR”, and then fell into the hands of law enforcement officers at the airport “Borispol”, received a sentence of 13 years behind bars, but in a strange way was free, according to a story TSN.19:30.

When it was reported that Lusvardi lives quietly on the territory of the Svyato-Pokrovsky monastery, Kiev, went to the representatives of the “National corpus” and other Patriotic organizations. “We see SBU responds to obvious the separatists. Everyone can easily find videos online where he claims to have killed, kills and wants to kill. He said that will liberate Kiev from the “invaders” and thereby end the war”. – said the activist Sergei Filimonov.

Video settings the centre of Kiev caught lusvardi the Brazilian, who fought in the East of Ukraine on the party of fighters

His story is really similar to the American series. Worked in Sao Paulo police, and in the fall of 2014 came to Ukraine and more years fighting for the “DNR” and “LNR”. He was seized at the airport “Borispol”, was sentenced to 13 years in prison, but an appeals court let him go. Yesterday a man was seen in the MP monastery in Kiev, where he worked as a monk, today in the Brazilian Embassy. 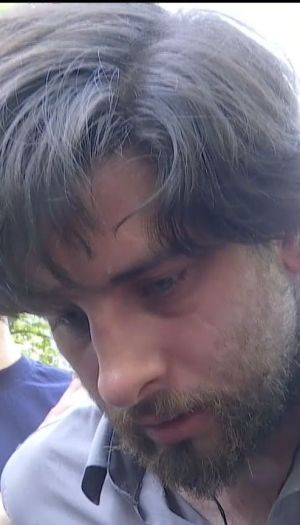 According to the court in January 2017, the Brazilian now had to serve 13-year prison sentence, but the court of appeal found that the sentence imposed contrary to law because to consider the case had not the Pechersky court of Kiev, Pavlograd district court of Dnipropetrovsk region. Measure Lusvardi expired and he was released, and when he was arrested by the nationalists – began to repent and make sure that no one was killed, and mortar fire the weapon of terrorists. “It was a mistake. I know that will be worth many years in prison,” he assured Rafael.

Activists brought the foreigner to the walls of the SBU. Investigators service assured that sent the indictment to the court, document review continues. Now the law-enforcers plan to investigate all the circumstances of the stay of Lusvardi in Kiev and to question him concerning contacts with terrorists “DNR”. “The security service of Ukraine notes that collected by investigators of SBU the evidence bases regarding the participation of Lusvardi in illegal armed groups of terrorists were completely confirmed by the decision of the court of first instance. A decision that caused outrage a large segment of society, is based solely on the procedural aspects. Now he is in the SBU, where he conducted the relevant proceedings in accordance with the current legislation of Ukraine. The service will further inform the public about the case against the citizen of Brazil”, – said in the SBU.

The situation also interfered with the city Prosecutor’s office – they say that they have filed a petition for election for the Brazilian measure and arrest the suspect. The hearing will be held in the Pavlograd court to exclude the possibility of appeal on procedural grounds. However, this will not happen until next month. “Kyiv Prosecutor’s office during the preparatory meetings for the review of the indictment against a citizen of the Federative Republic of Brazil Rafael Marcus of Lusvardi, who is accused of involvement in a terrorist organization “DNR” and the recruitment of mercenaries before the court will be made of the election petition accused the measure of restraint in form of detention. The meeting will take place at Pavlograd district court of Dnepropetrovsk region 06.06.2018. Today other legal grounds for consideration of the petition for election measures of restraint G. M. of Lusvardi the law provides. The period chosen him earlier measure of restraint expired in February of this year and could not be extended in connection with the duration of consideration of the question of territorial jurisdiction of the criminal proceedings”, – told investigators.