Representatives of local government tried to bribe the people from the Putin administration to inflate the real figure of the turnout in Russian elections in Crimea.

The head of the Mejlis of the Crimean Tatar people, MP of Ukraine Refat Chubarov said that the turnout for the “elections” of the President of the Russian Federation in the occupied Crimea on 18 March 2018, compared with just 42%.

He told about it in Facebook, referring to the FSB, which has at its disposal.

8% of voters spoiled their ballots.

“Representatives of the presidential administration of Russia were in the Crimea to observe the Russian presidential election. The so-called white Protocol with real data on the voting results contained the turnout at 42%, of which 8% are invalid and spoiled ballots. That is, only 42% was the turnout. Those who took the ballots dropped into the ballot box. And of these, 8% were invalid and spoiled. That is, 8% of people who are not afraid to come, but they messed up the ballots,” – said Chubarov.

According to the head of Parliament, controlled by Kremlin head of Crimea Sergey Aksenov and other representatives of local authorities tried to bribe the representatives of Putin’s administration to inflate the real figure of the turnout in Russian elections in Crimea.

Videoobservation Crimean authorities have launched a new wave of searches

This was reported Refat Chubarov. According to him, different regions of the Crimea in the home, shops and offices of entrepreneurs, philanthropists and activists of the Crimean Tatar national movement, as well as in the homes of their children came to the special forces with weapons and conducted total searches. The operation led by the FSB. 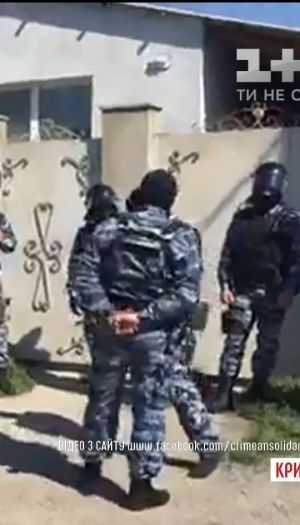 “Representatives of the Crimean authorities, in particular, Aksenov, tried to influence Moscow emissaries, including for bribery, for correction of documents in favor of increasing the turnout of at least 10-15%, but they refused. This caused concern among the Crimean authorities, as the failure of the Kremlin’s plan to turn the election results in a confirmation referendum 2014, may cause organizational insights in relation to the Crimean leaders were unable to use the available administrative resources” – said Chubarov, referring to the FSB.

Earlier, President Petro Poroshenko has submitted to Parliament a bill according to which the Russian citizenship on residents of Crimea as a result of unlawful actions of the occupation administration (Russian state authorities and controlled by the breakaway authorities, usurped power) will not be considered voluntary.