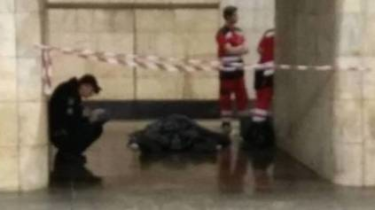 At the place of work medics and police

On the morning of may 9, one of the metro stations have discovered the body of a man.

This is reported by witnesses to the incident.

“In Kiev. At the station the medics and the police. The paperwork. On the platform lies the body of a man”, – reported in social networks journalist Sergei Kravchenko.

What was the cause of death is not yet known. Statements from the metro while also not.

We will remind, the body of an unknown male, aged about 35 years was found by police on the night of April 27 in the transition the metro station “Moskovsky prospect” in Kyiv. Militiamen have not found any documents or mobile phone. Police opened on this fact criminal proceedings under part 1 of article 115 of the Criminal code (premeditated murder).