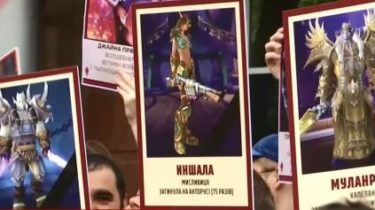 The participants expressed their positions, the protest against turning the occasion into a circus.

More than two dozen detainees, jostling, insults and doused with green paint and shit man – these were the results of Russian propaganda in Kiev, dedicated to the victory Day. It was held under reinforced security measures, according to a story TSN.19:30.

Come to the venue of the action was possible only through the metal detectors, and the convoy was escorted by Ukrainian military personnel. Checked people, not only the police, but the activists to organize volunteer squads decided is waiting for provocation on may 9 celebrations.

More than two dozen detainees, shoving and shit and poured green paint the head of the “Rossotrudnichestvo” Konstantin Vorobyov. These are the results of the celebration of victory Day in Ukraine. Most of the provocations was recorded in Kiev during the propaganda action “Immortal regiment”. About two thousand fans of communism and Russian politics marched to the Memorial of glory. 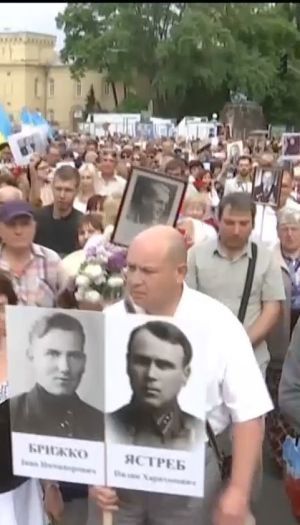 The action with portraits of the fallen in the Second world war appeared in Russia only in 2011, but strongly supported the Pro-Russian organizations in Ukraine, as a way of propaganda. Using provocative slogans and Communist symbols forbidden in the crowd today , many times there is a scuffle, which quickly eliminated the police. The most active violators of peace detained. Some chose to disguise prohibited red or yellow-black tape clothing items. Open from St. George’s ribbons came the mother of the deceased people’s Deputy of regions Elena Berezhnaya who all took a share and even a portrait of Ukrainophobia Elder woman eventually detained by the police.

The participants of the March reached the Russian diplomat Konstantin Vorobyov, who activists doused with shit and green paint. “You smell Russian world”, – said the people to record the event. Phone Vorobyov told TSN that now has an eye problem and have addressed to militiamen. Other activists picketed the March with portraits and slogans “Fascism will not pass” their campaign “immortal regiment” they are called computer games, and themselves dressed in the images of fictional characters. “This has turned into a circus. These veterans can’t even come to this celebration and people arrange this coven every year during the war. We, honestly, got tired of that,” explained the creative participants of the picket.