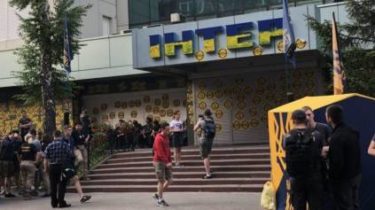 National housing urge to go to the customer provocation.

Representatives of the National housing plan “go and see visit” to the co-owner of TV channel “inter”, the Deputy Chairman of the faction “Opposition bloc” Serhiy Lyovochkin.

This was stated press Secretary of the National corpus of Alexander Alferov near the building of the TV station after the airing of the controversial concert to the victory Day.

Only national TV channel “inter” the whole country called the dead Ukrainian heroes – “fascist criminals”. Throughout the day we tried to reach the common sense of editors and the management of the channel and demanded to withdraw the Pro-Russian propaganda from the air evening concert. * As expected, the “inter” acted like the last scum. Now neither the TV station nor its owner, collaborator Levochkina alone we will not leave. It’s only the beginning… Call on all Ukrainians to come tomorrow, 10 may, 13:00 to the subway station “Vydubychi” and maintain the protest from Ncorpus! #Narbutas #1013Видубичі

Published by the national housing 9 may 2018.