Do “inter” Patriotic: Ncorpus plans to continue the protest against the TV channel 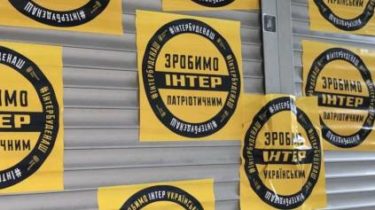 Do “inter” Patriotic: Ncorpus plans to continue the protest against the TV channel

May 9 – the first day of the protest, which included preventative actions.

Activists of the “National housing” plan to continue the protest against the activities of “inter”.

About this informed the head a press-services “National corpus” Roman Chernyshev, writes UKRINFORM.

“We expressed our position – “inter” we are all Patriotic public of Ukraine, not heard, and continues rude to mock the Ukrainians. Therefore, we reserve the right to any other action with respect to this anti-Ukrainian activities of Pro-Russian already open channel. We will also perform certain actions the pressure on the channel – its owners and managers, starting probably tomorrow, if they don’t hear otherwise, the action will continue, i.e. all our actions in respect of “inter” is one big action. May 9 was only the first day, which included preventive actions – visual,” said Chernyshev and showed the hand to the side of the facade of the channel, oblasnogo stickers with slogans such as “inter will be our” and “Make the inter Ukrainian (Patriotic)”.