The situation in the Donbass difficult: militants shoot in all directions, killed Ukrainian soldier 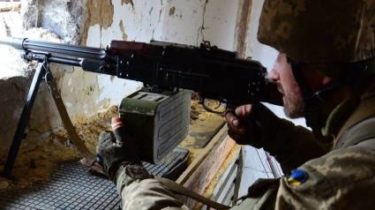 The situation in the Donbass difficult: militants shoot in all directions, killed Ukrainian soldier

For Wednesday the Ukrainian army counted more than 70 enemy attacks.

May 9, in the area of operations of the combined forces in the Donbas fighters 73 times opened fire on Ukrainian positions.

“On the line of contact continued intense fighting. Active defense positions by units of the United forces did not allow the enemy to improve the tactical position. In the last day alone our protector was killed in a battle near the settlement Crimean. Three defenders of the Town and two defenders injured Volnovakha”, – stated in the summary of the press center of the headquarters of the United forces.

The most tense situation remains in the area of Avdeyevka, Sands, Shyrokine.

“Russian occupation troops 20 times used artillery and mortars, 53 times resorted to aiming fire at our positions using small arms, grenade launchers, infantry fighting vehicle. In some areas, was an active assault action. Unit of the joint forces engaged in intense fighting in the area of Avdeyevka industrial area, village Sands, gave an adequate response and destroying the firepower of the enemy. According to the survey, only Avdeevka direction the enemy lost 5 killed and 7 wounded”, – stated in the message.

For 10 may, fighting continued in the Donetsk and Mariupol directions. Losses among Ukrainian troops there.