800 rescuers, boats on the river, checking for explosives. As SSES prepared for the Champions League 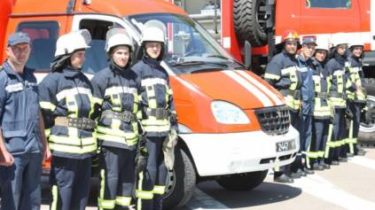 800 rescuers, boats on the river, checking for explosives. As SSES prepared for the Champions League

© The state service of Ukraine for emergency situations

26 may in Kiev will be held fans of the tournament.

During the finals of the Champions League, from may 21 to 28 in the strengthened mode of service will be more than 800 personnel and approximately 190 pieces of equipment of gschs.

You’ll never walk alone. As residents of the capital took to save the face of Kiev with free housing for the fans

This was announced by the head of the service Mykola Chechetkin during a working meeting at the airport “Borispol” on 11 may, the press service of the SSES.

Calculations of firefighting and rescue and special equipment, as well as foot patrols will be on duty at the NSC “Olympic”, “Dynamo” stadium, in the fan-zone “City of Champions” and in places of gathering of fans – Shevchenko Park and the square near the Palace “Ukraine”.

Before the start of matches, pyrotechnic calculations will be checked adjacent to the stadium area for the presence of explosive devices, and the control over radiation and chemical situation in the stadiums will be carried out by units of radiation, chemical and biological protection.

At the international airport “Kiev” the clock will be on duty aircraft an-26 and helicopter “Eurocopter” in the medical version. On the Dnieper will be on duty four boats and diving-rescue unit.

Earlier, the British Embassy in Kiev warned the fans of Liverpool, who travel to Kiev for the final of the Champions League, about the possible dangers in the capital of Ukraine. So, in the recommendations it is noted that in Kiev should be wary of racial attacks and pickpockets. Britons also advised to avoid talking on the subject of relations between Ukraine and Russia, drinking with strangers. The report notes that the local alcoholic drinks are stronger than at home.