In the case of Symonenko held on 24 search – SBU 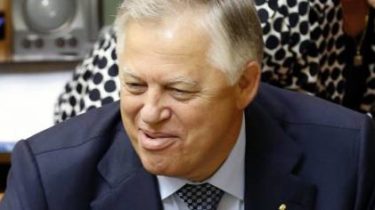 In the case of Symonenko held on 24 search – SBU

He is suspected of actions with the aim of seizing power.

The security service of Ukraine conducted 24 searches during the investigation of the case of the leader of the Communist party of Ukraine Petro Symonenko.

On 12 may broadcast “112 Ukraine” said the head of the SBU Basil Gritsak.

“Symonenko questioned. … At his home and not only at home have been a number of searches. Just 24 search. We work with materials that were collected during these proceedings,” – said the head of the SBU.

We are talking about the appointment of the examination for the seized materials, before printing of products, on the subject of crime under article 109 of the criminal code. (Actions aimed at violent change or overthrow the constitutional order or the seizure of state power).

“As the examination is aimed weapons… the subject similar to the weapon – Stechkin automatic pistol and 120 rounds of ammunition. After the examination the decision on the admission of its results to the criminal proceedings and scheduled procedural steps P. Symonenko”, – said Hrytsak.

We will remind, against Symonenko, and other associates of the banned Communist party launched a pre-trial investigation. They are suspected of actions whose aim was to seize state power. Besides, by words a press-the Secretary of SBU Elena Galanski, suspect charged with treason.