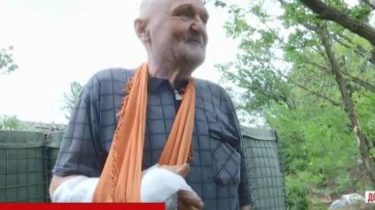 A local resident was repairing the roof of his house when it was a Russian bullet.

Near the occupied Gorlovka, a local resident got a Pro-Russian sniper. An elderly man escaped injury, according to a story TSN.19:30.

The defense next to keep the soldiers of the 24th brigade, which before prevented the passage of the enemy dig. “Four people were. Threw out the grenade launcher, three grenades – gave them a bit back,” told about the event the military at the forefront. Such a battle of “meeting” there is a commonplace event, and the army is almost not paying attention. A much more serious danger comes from snipers, working in pairs of 2-4 people from different directions. As they shoot through the territory of the military and the yards of local residents.

It occurred near the occupied Horlivka. Year-old man escaped injury. Old said that the bullet hit him when he was fixing the roof of his house. Fortunately, the soldiers of the 24 brigade arrived in time to help. 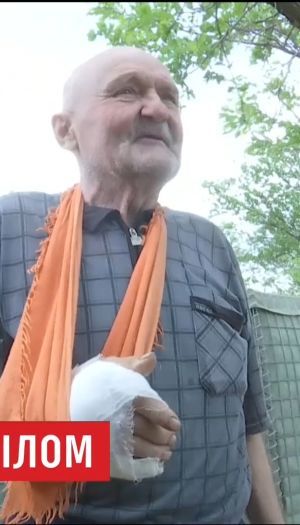 “She climbed the ladder, and then from boom! I didn’t realize how down I fell down the stairs,” – said Nicholas Mantis. It was his seventh decade in Novgorod, and despite four years of my life practically on the front line, still not willing to put up with insanely close to danger. The old man explains that a few days ago, he decided to repair the roof of his house, and in the afternoon during the work of the sniper’s bullet hit his hand. “And there, my roof is leaking, and just then the rain happened, and I think maybe there is something to correct. And something like rain – and a full house of water. And it was already off and flew,” explained a local resident.

Fortunately, the soldiers of the 24th brigade arrived in time to help and took the wounded civilian to physicians. But the danger for local residents has not disappeared, because the front line runs too close to homes. With the onset of twilight in Novgorod begins a completely different life – the lottery, for both military and civilians, a success which has the ability to survive until morning.