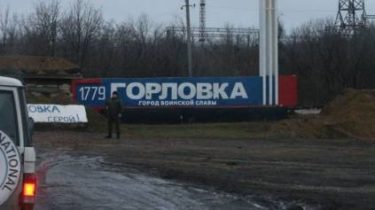 The militants claim the capture of the alleged settlement Gorlovka.

After the may holidays the militants started to panic because of the alleged offensive by the Ukrainians. In fact, in the days when the Ukrainians said to myself “Never again”, the mercenaries, along with the Russians acted under the slogan “Can you repeat that”. May 9 was the apogee of a powerful cannonade of the Russian batteries, according to a story TSN.Week.

May 9 parade of the occupation forces in Donetsk took the black dog. She was just tagging machine of the so-called defense Minister of the terrorist “DNR” and loudly responded to reports of a former athlete in his General’s uniform. Probably local psychics saw the black dog is a bad omen – it was on 9 may, the shelling positions of the Ukrainian defenders continued almost around the clock.

Poltorak told, whether in Ukraine a new wave of mobilization

“Hysterical pobedobesie on the other side, apparently, amplified by alcohol, and the desire to show that they too have weapons,” – said Vladislav Klochkov, the commander of 93 OMBRE.

Heavy artillery militants methodically treated the Ukrainians along the whole front line. There were many dead and even more wounded.

Reconnaissance assesses the celebratory attack of the enemy the commander of the unit in the long-suffering Marinka. “They’re trying to establish that we have to move forward. So they we’re trying to check,” said “Michael,” officer 30 OMBRE.

The Ukrainians are also ready to move. But willing to pose for the cameras militants. They convince Ukrainians went to Cigari located in the suburbs of the occupied Horlivka.

The Ukrainian side has not yet confirmed the promotion. However, we know that the nature of the actions of the Ukrainians has changed. “The defense have maneuverable. The enemy thinks that we are there, and actually we’re not,” added the commander.

Active defense is the only way to effectively counter Russian regular units who come to Donbas to perform the deadly task and then return to the territory of Russia. About the fact that Russian soldiers kill Ukrainians in Donbas, for the first time openly talking world leaders after analysts Bellingcat published the names of the Russian generals, who personally supervised the shelling of Mariupol. Washington responded with conviction, “Captain Obvious”.

Kurt Volker, the U.S. special representative on Ukraine: “Russian staff officers put in command of the military units in the East. And I would not say that it was a surprise for us.”

Thus, the Americans acknowledged the presence of Russian military personnel in command positions in the divisions of fighters. Therefore, the Ukrainian soldiers in the trenches waiting for the active help from overseas allies. However, the help is already there. Preparation of calculations on anti-tank systems “javelin” is in full swing in several brigades on the front line, and the US special envoy Kurt Volker on may 14 will go to the front.

Combined forces command in the East has spoken candidly about what the meaning of the word “victory” as the ultimate goal. “Clear the area, which is on all documents and historically ours,” – said Vladislav Klochkov, the commander of 93 OMBRE.

According to the Ukrainian military, the immediate prospect of war – to go on the real line of the Minsk agreements.