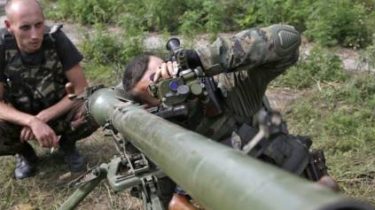 Among the Ukrainian military is wounded.

From midnight, may 13, fighters of illegal armed formations on the Donbass 12 times fired at strongholds of the Ukrainian military.

This was reported by the press center of the headquarters operations of joint forces.

The attacks began just after midnight. The terrorists in Luhansk direction issued by the Ukrainian defenders from 40 min with mortars caliber 82 millimeter. And already about 5:00 in the morning the shelling started near Svetlodarsk of 122-millimeter artillery and mortars of various caliber. Different weapons fired at the Ukrainians and Luhansk.

In the direction of Donetsk near Talakivka, Experienced, Water and Avdeevka were shelling from grenade launchers and infantry weapons.

Recall that during the day militants carried out 73 of the shelling, including the use of prohibited weapons.