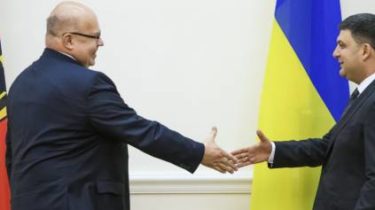 © The Cabinet Of Ministers Of Ukraine

Peter Altman made a visit to Kiev.

The Minister of economy of Germany, Peter Altman during a visit to Kiev on Monday, may 14, noted that in a dispute regarding the gas pipeline “Nord stream-2” we need to reach agreement between Ukraine and Russia, informs Agency dpa. Must be found a solution that meets the interests of all parties involved, he said.

During a meeting with Prime Minister of Ukraine Volodymyr Groisman, the Minister also noted that Germany was “very serious” about its responsibility in front of Ukraine in this issue.

“We should respect and interests, including financial, to develop safeguards in order to continue the transit of gas to Ukraine and to achieve positive results”, – quotes the words of Peter Altmar official website of the Cabinet of Ministers of Ukraine.

Volodymyr hroysman has stressed the importance of supporting Germany’s sovereignty and territorial integrity of Ukraine. In respect of the project of the pipeline “Nord stream-2” Groisman said that this was a purely political project for political pressure on Ukraine and Europe.

“For Russia, this is a profitable project, which in the long term will provide the dependence of the whole of Europe from Russia. While there is no real guarantee that Nord stream – 2 will not be used for political purposes,” – said Prime Minister of Ukraine.

We will remind that the Minister of economy of Germany Peter Altmar paying a visit to the Ukraine and Russia. The Ukrainian capital is the first stop in a two-day tour of the German Minister. After Kiev Altmar will visit Moscow.