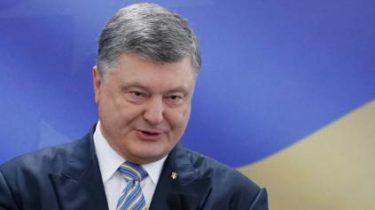 The President of Ukraine has complained that Russia is trying to involve in their adventures representatives of the European business.

The illegal construction of the Kerch bridge to Crimea is another evidence of the contempt for international law by the Kremlin.

Wrote about this on his page in Facebook the President of Ukraine Petro Poroshenko.

“It is particularly cynical is the fact that its discovery comes on the eve of the anniversary of the deportation of the Crimean Tatar people by Stalin’s regime. However, despite the futile attempts of Moscow to legitimize the temporary occupation of the Crimean Peninsula, a coherent solution to a number of international jurisdictions confirm the gravity of an international crime for Russia will only grow”, – he stressed.

According to Poroshenko, Ukraine will consistently defend their positions.

“Let me remind you, my order of the Arbitral Tribunal of the UN Convention on the law of the sea was filed on protecting the sovereign interests of Ukraine, in particular, in connection with the illegal construction of the Kerch bridge,” he said.

The President also expressed regret due to the fact that the Russian authorities are trying to involve in their infrastructural ventures of some representatives of European businesses, seeking thereby to escape from international legal responsibility.

“Sure, the aggressor will not succeed, he will be liable in full. And the bridge will definitely need invaders when they will urgently leave our Crimea” – summed Poroshenko.

PP: the Illegal construction of the Kerch bridge is another evidence of the contempt for international law by the Kremlin. Especially…

We will remind, on Tuesday, may 15, President Vladimir Putin personally opened the bridge that connects mainland Russia with annexed Crimea. Traffic on the bridge for vehicles will be open early in the morning on may 16.

Ukraine’s foreign Ministry earlier today sharply criticized Russia’s actions. In particular, the Ukrainian diplomats have said that the bridge was built on occupied territory. The construction has a negative impact on the environment, shipping and fishing.