The fare in public transport of Kyiv will be doubled 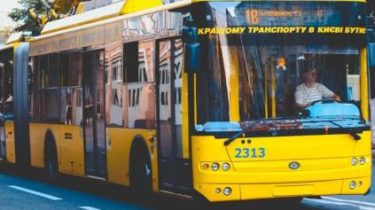 The fare in public transport of Kyiv will be doubled

Single trip in public transport of Kyiv will rise by up to eight hryvnias.

On July 14 in Kiev public transport will operate the new fares. The cost will double from the current UAH 4 to UAH 8. Passengers who use travel cards for a month and contactless cards with their replenishment will pay for one trip from 6.3 hryvnia.

The city administration sets the “lowest possible fare for residents who can travel constantly, and 8 hryvnia will be paying passengers using public transport sometimes or guests of the capital”, said the Deputy head of the KSCA Dmitry Davtyan, writes “Interfax”.

He added that a fundamental condition of the mayor was to preserve all the benefits of travel by public transport for pensioners, veterans of the ATO, Chernobyl veterans and other preferential categories of the population will travel free.

In “the Kiev underground” has told, how much more expensive fare

“This is a difficult decision. And we had to take it, to avoid the threat of traffic jams in the capital”, – said Davtyan.

“Let the father and goes”. In Rivne, the son of Atoshnik refused to free travel on bus

For regular subway passengers, users of contactless cards , the fare will increase by 1.3-1.5 hryvnia.

“The cost of the trip in the metro will increase by 1 UAH 30 cents in the travel and 1 UAH 50 kopecks for funding the subway map on 50 trips, with respect to the current value of 5 hryvnia. All privileges for socially vulnerable categories of the population such as the metro 23, saved,” – said the head of KP “Kiev metro” Victor Bragin.

He added that the tariff change will be focused on 2 main areas: the payment of the energy resources has risen, and the approach salaries in the enterprise to averages in Kiev.

We will remind, Klitschko announced on 24 April that the journey on public transport in Kiev can to rise to 8 UAH from 15 July. During the planning of revenues in January-July, the company took into account the rates at 4-5 hryvnias, however from 15 July, the projected increase in fare to 8 hryvnia for all types of transport. So, almost half can rise the fare in trams, trolleybuses, buses, funicular railway and city trains.