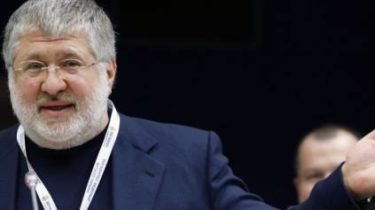 The businessman – the desire Poroshenko and civil conflict in the East.

The former head of the Dnipropetrovsk regional state administration, businessman Igor Kolomoisky gave an interview to Jeanne Nemcova from DW.

About the relationship with Poroshenko. “We never compete with Poroshenko, but I’m his opponent. The ideological opponent. It is our different attitudes to life. To democracy, freedom of speech, the events in Ukraine, what should be the President. I have about a very big disappointment. For example, Poroshenko’s order for a second time to be elected President (he has such a fixed idea), have full control of all TV channels”.

About Yulia Tymoshenko. “I sympathize with Vakarchuk. Not discover America if I say that everyone wants to see new faces. But if you take the old, I think that the most worthy to date, is Tymoshenko.”

The war in the Donbass. “Today I can safely be called a civil conflict only one of the characteristic features – both sides take part citizens of Ukraine. On the one hand, he fully supported the Russian Federation. Supplied with weapons, military instructors, command staff, ammunition, logistical support. The border is open. No problems with it”.

On the nationalization of “PrivatBank”. “There was an illegal, from my point of view, nationalization. What are the judicial processes in Ukraine, and they go, so to speak, with varying degrees of success, but more, as for me, in our favor. And if the court decides that the nationalization was wrong, then we must return the Bank. And then the whole of the London process will end itself because we can not do against himself to sue. While the control of the state over the Bank, they initiated the process in London with one goal – we make life difficult, limiting our assets. To freeze these assets, we impose restrictions on personal expenses. Until there is a court order, we carry out such rules of the game”.

About yourself. “And if I were an oligarch, the oligarch positive. Democratic oligarch. I’ve never been in power, I was always opposition. Nobody will reproach me that I was once in power.”

About a personal conflict with Putin. “Already as Governor, I would, in theory, to find the words. But from the point of view of emotion played a role in what happened between Russia and Ukraine, events in Crimea and what is now in the Donbas”.

About Ukrainian nationalism. “Nationalism, from the point of view of external aggression by the Russian Federation, is a positive development. That is, there would be nationalism, the Ukraine would join Russia. Would have forgotten about it. Already in 2014, would be some new Pereyaslav Rada”.

About Russia. “Russia has taken the dead ends of history. She went into a dead end in degradation. And could go to evolution.”