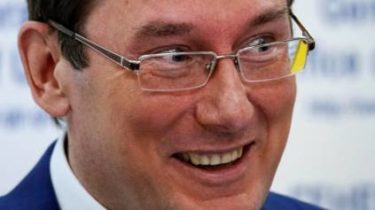 The attorney General explained his role in the upcoming elections.

Prosecutor General Yury Lutsenko is not going to participate in the presidential elections, scheduled for 2019.

He told about it in interview “Interfax-Ukraine”.

“I’m probably the only acandidate the presidency of a large circle of my friends. This is a thoughtful decision. From the very beginning of my work here, despite the different conversations, I’m acandidate in presidents”, – he stressed.

According to Lutsenko, during the elections of the President of Ukraine, his role is “to hold back and not start to give direct estimates of the populists”.

“I’ll try to speak only one – support those who build the country and not those who criticizes and gives endless unrealistic promises. I think that the “popular front” and the PPO, and a number of other parties it’s time to realize that self-sufficient people, and the average creative class, a long time not looking for leaders, and a stable political force that defends their interest. The old parties have no chance… Need a self-cleaning, merging, and update. This applies to titles and leadership, and goals,” – said the Prosecutor General.

In addition, he also supported the position of the former Prime Minister of Ukraine Arseniy Yatsenyuk concerning the strengthening of the powers of Parliament.

“Everyone knows that Yatsenyuk this has long sought. I think so too, but less publicly,” he concluded.

We will remind, earlier Ukrainian Prime Minister Volodymyr Groysman assured that while has no presidential ambitions and would not run for the President. At the same time he promised that he will take part in the parliamentary elections, “to fight for the adoption of concrete decisions.”