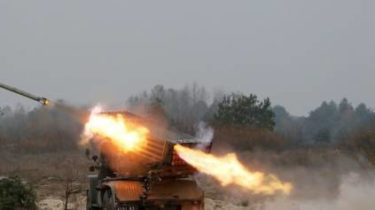 On the Lugansk direction the snipers worked.

For the past day, may 16, the situation in the area of operations of the combined forces is more complicated. Along the line of clashes continued active hostilities.

“Russian occupation troops, ignoring international agreements, 66 times violated the ceasefire, including 25 times used mortars, artillery and jet systems of the BM volley fire-21. Around 21:00 the enemy has used MLRS BM-21 “Grad” on the positions of our troops near Avdiivka. Division of the United forces gave an adequate response to the invaders and were active defense”, – stated in summary as of 7:00 may 17, 2018.

According to the military, at the direction of Lugansk active fighting continued in the areas of settlements Novozvanovka and Trinity, in particular on the opponent’s side worked as a sniper pair. In turn forces OOS applied effective contraire events.

During the fighting yesterday, two Ukrainian soldiers were killed and four were injured, were quickly evacuated to the hospital after rendering medical aid to their life threatens nothing.

Meanwhile, intelligence reported that over the past day were eliminated five militants and another eight injured.

“In the current day, 17 may, the situation on the frontline remains under control. Losses among the Ukrainian defenders there,” – added to the staff.

We will remind, earlier the Ukrainian military seized the weapons of the militants near the village of Marinka in the Donetsk region. The unit commander and his subordinates who participated in the RAID, presented to the state awards.