In Kiev to restore the destroyed drug, the monument to Kyi, Schek and Khoryv 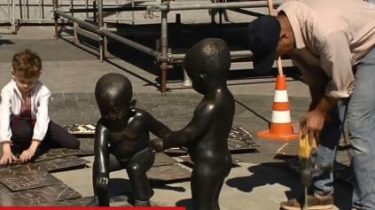 In Kiev to restore the destroyed drug, the monument to Kyi, Schek and Khoryv

In Kiev sculptors restore vandals desecrated art composition “the Kids, let them boats”. Little Kiy, Schek and Horeb, got back their favorite ships and a good chunk ripped out of the “meat” of the map of the capital, according to a story TSN.19:30.

A third of the Kiev – brass plates with images of Podol, Obolon and Troyeshchyna – along with the boats stole two drug addicts and sold for scrap. The vandals are caught and put behind bars, and the sculpture restored. Its author Vladimir Zhuravel’m sure it won’t happen again. “Now is monitored, so there is already this will not happen again. Now I do maximum security without the tool, just a crowbar, do not destroy”, – he explained.

A little to the founders of Kiev return stolen goods. Kyi, Schek and Khoryv today I received back my favorite ships, and even a good chunk ripped out of the “meat” of the map of the capital. 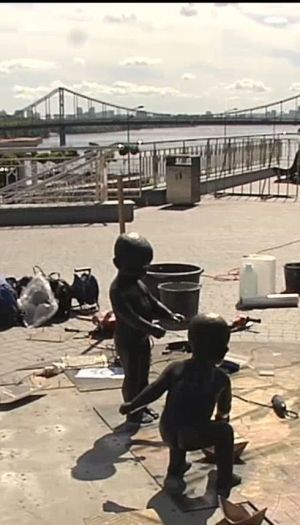 Vladimir. Pope Nicholas and 9-year-old brother Michael, creative people, but today employs more than builders. “This is an example of how it is harder to restore than again, when you do,” say the artists. With Misha sculpted figure of one of the kids so that the child now with curious glances at work. Adults concerned that a powerful well-connected fittings brass plates together to move them was not under force to any vandals.

As reported, the bronze statue of founders of Kiev in the images of the kids installed it on the Postal square of the capital in may last year. The sculptural composition your idea hatched 8 years.