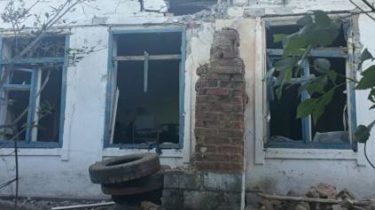 The militants in the night of Friday, may 18, fired artillery Trinity, the result of which killed civilians.

“Today, 18 may, about two o’clock the occupants opened fire from 122-mm artillery shells at the settlement of Troitskoye. Recorded 15 artillery shells in residential areas of the village,” reads the summary of the press center of the United forces as of 7:00 may 18, 2018.

Gunmen fired on a school in Svetlodarsk: wounded one civilian

According to preliminary information, two civilians of the Trinity were killed and two were wounded. At the scene arrived rescuers and a brigade of medical care.

In addition, the military said the revitalization of the enemy in the areas of settlements Novoluganskoe, Trinity, Svetlodarsk, Zaitsev, Avdiyivka, opytne, Vodyane. In General, for on 17 may, the rebels 60 times violated the ceasefire, including 26 cases of use of cannons and mortars, on the demarcation line.

During the fighting over the past day, may 17, seven soldiers of joint forces were injured.

At the same time, according to intelligence reports, the enemy suffered losses: six militants killed and one wounded.

Recall, on the eve of the Donbas combined forces took control of the South. Now the situation in the South is complicated, but controlled. Combat mission for the retention of the settlement performed by the combined unit of 24 Ombre.