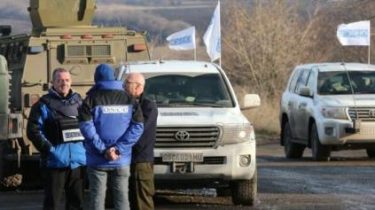 The explosion occurred at a distance of 300-500 meters from observers.

Sunday, may 20, in the Luhansk region near the patrol of the Special monitoring mission of the OSCE explosion.

About it it is spoken in the operational report of the mission.

The incident occurred at 11:04 in the village of Golden, which is under the control of the Ukrainian government. Two SMM patrols consisting of ten members of the Mission on four armored vehicles were at a distance of approximately 20 meters South of the checkpoint militants.

All the observers got out of the vehicles, five of them spoke with two unarmed fighters.. Even from 5 to 8 members of the armed forces walking around the checkpoint, one of them had a gun, and the rest were unarmed. In two minutes, the OSCE observers heard an explosion of uncertain origin at a distance of 300-500 meters to the North. SMM previously recorded anti-aircraft guns in approximately 10 meters North-West from the said checkpoint.

After the explosion, both the patrol immediately departed the area and returned safely to their bases.