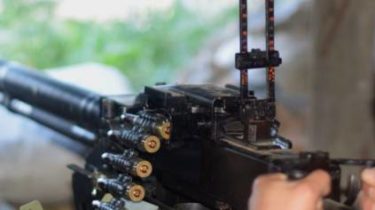 The Ukrainian side had counted more than fifty of the enemy’s attacks.

For Sunday, may 20, at the Donbass militants carried out 55 attacks on Ukrainian positions.

“The situation in the area of operations of the combined forces remained controlled. Intense fighting continued on Svetlodarsk, Gorlovka, Donetsk and Mariupol directions. Russian-occupation forces 55 times violated the ceasefire, including 19 times used Minsk agreements prohibited weapons. Foreign troops were active in the defense and gave an adequate response to the enemy”, – stated in the summary of the press center of the joint forces.

Less tense situation in Luhansk. There is intense fighting continued mainly in the arc Svetlodarsk, in the areas of Trinity and Luhansk.

In Gorlovka direction in the areas of Zaytsevy, Noise, Novgorod – militants under cover of fire from mortars tried to oust from positions of Ukrainian troops.

“The invaders, in violation of international law yesterday, at five in the morning on may 20, opened heavy mortar fire at residential houses in the village of zaytsevo, “- said in the message.

At the Donetsk direction is the most active fighting continued in the areas of Avdeyevka, Sands, Krasnogorovka, Marinka.

On the Mariupol direction the “hot” Water and near Shyrokine.

“During the fighting over the past day and today the combined forces do not have losses. According to intelligence reports, three occupants were injured, the other enemy losses are specified”, – stated in the summary.