Activists on Bankova broke chairs over. 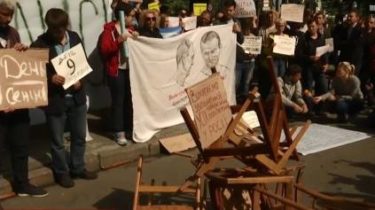 Activists on Bankova broke chairs over.

People require more active actions of the authorities to release the Director from captivity.

Near the presidential Administration in Kiev, filmmakers and artists have broken chairs. So they demanded more action from the authorities for the sake of the prisoner of the Kremlin Oleg Sentsov, says the story TSN.19:30.

Today marks nine days of hunger strike political prisoner of the Kremlin, which demands the release of all unjustly accused in Russia of Ukrainians. For the release of hostages said today during the meeting of the presidents of Ukraine and Estonia. In particular, Petro Poroshenko assured that Ukraine is trying to use all the tools of pressure on Russia. “We have coordinated our actions on release of hostages, because it is a direct part of the Minsk agreement, where Russia has pledged to free the hostages. We are talking about Sushchenko, and Sentsov, and captured the Crimean Tatars”, – said the Ukrainian leader. 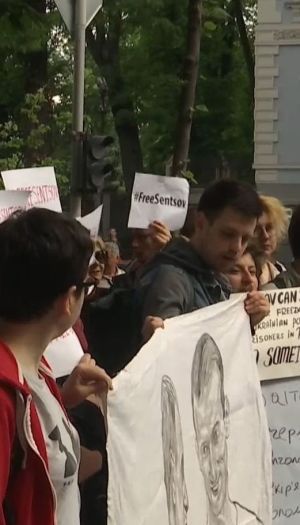 The activists appealed mainly to diplomats, calling to find new negotiators for the release of Director. “We understand that part of diplomatic work going on in the shadows. But we, the citizens of Ukraine, want to ask what makes the power for liberation. We do not have a person who would coordinate the process of liberation and which would be able to address at least the relatives of political prisoners”, – noted human rights activist Maxim Butkevych.

Abducted in occupied Crimea and the Kremlin abandoned for terrorism directed at the Russian prison is for four years. To attract the attention of more people, Sentsov began to starve on the eve of the world Cup, which will be held in Russia next month.