Poroshenko spoke with Mae: opinion on the MH17 crash is a proof of aggression of the Russian Federation 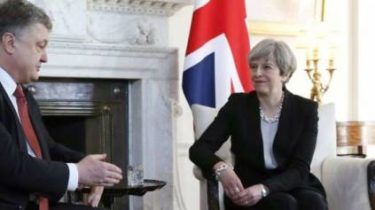 Poroshenko spoke with Mae: opinion on the MH17 crash is a proof of aggression of the Russian Federation

The parties discussed ways to expand bilateral cooperation in security and defense spheres.

The President of Ukraine Petro Poroshenko held a telephone conversation with Prime Minister of great Britain Teresa may. The main theme of negotiations – Russian aggression and ways of dealing with it.

“The two leaders have paid attention to mobilize the international community in opposition to the aggressive policy of the Kremlin in the context of preparations for the summit of the group of seven, which will be held on 8-9 June in Canada. The Ukrainian head of state stressed the need for greater international pressure on Russia with the goal of full implementation of the Minsk agreements (on the situation in the Donbass). The interlocutors stressed the importance of continuation and strengthening of sanctions against Russia, in particular in the context of its illegal construction of the Kerch bridge from the occupied Crimean Peninsula”, – the press-service of the President of Ukraine.

Drawn fighter and the Spanish Manager. Chronology of lies of Russia on MH17

It is noted that “Petro Poroshenko and Theresa may expressed full support for the conclusion, promulgated by the investigation team for the crash of MH17, and called it another proof of Russian aggression”. In conclusion, in particular, stated that “Buk” that shot down a passenger plane with 298 people on Board, was made in Russia and was in service with the Armed forces of the Russian Federation in the Kursk.

Poroshenko and Mae also discussed the increased international pressure on the Kremlin to release Ukrainian hostages and political prisoners.

The two sides discussed ways to enhance bilateral cooperation in the sphere of security and defense.