The situation in the Donbass remains difficult: among Ukrainian soldiers are wounded again 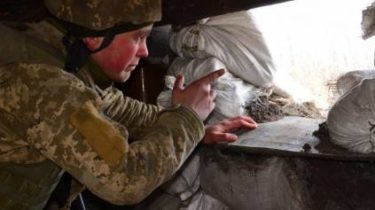 The situation in the Donbass remains difficult: among Ukrainian soldiers are wounded again

For Wednesday, may 23, in the Donbas the militants are 38 times fired at the Ukrainian positions.

“The situation in the area of operations of the combined forces remained difficult. Fighting continued along the line of contact. The Russian occupation troops, ignoring the Minsk agreements, 38 times violated the ceasefire 8 times used mortars on the positions of our defenders. Any use of weapons the enemy has received an adequate response from units of the United forces”, – stated in the summary of the press center of the joint forces.

Among Ukrainian soldiers are wounded.

“During the fighting, two of our defenders were injured. Currently, the wounded are evacuated to hospital, where they received qualified medical help. For the current day of losses among the Ukrainian military there. According to intelligence reports, killed 2 and wounded 3 invaders”, – stated in the message.

The most tense situation was in the Crimean, Trinity, zaytsevo, the mine Butovka, Granite, Experienced, Pavlopolya.

“Russian occupation troops once again violated the silence regime near the settlement the Village Lugansk, so in this area there was no withdrawal of troops according to the earlier reached agreements”, – stated in the press center.

Meanwhile, the NSDC Secretary Oleksandr Turchynov said that Russia could launch an offensive in the Donbas after the world Cup.