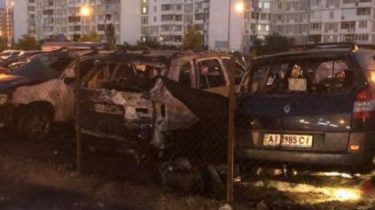 It happened in the Darnytsia district of the city.

In Kiev on the night of 29 may, unknown persons set fire to the car of the assistant to the Deputy Igor Mosiychuk Stanislaus Kolomiets.

About it the Deputy from “Radical party” has told on the page in Facebook.

“According to the eyewitnesses, to the Parking area in Darnytskyi district of the capital at Grigorenko 36, where there was a parked car Stas, drove a scooter (motorcycle) driver who doused the car with gasoline, lit it on fire and left”, – stated in the message.

In Kiev two “burglar” caught in the hot, tried to escape and flew into a COP car

The fire burned not only the car of the assistant to the Deputy, but also two neighboring cars.

According Mosiychuk, the crime was committed in the eyes of the crew of the patrol police, who was standing near. However, the law enforcers allegedly tried to detain the attacker, but simply caused it is investigative-task force and firefighters.

Mosiychuk requires not only to find the attacker, but also to investigate regarding the competence of law enforcement officers who were on the scene.