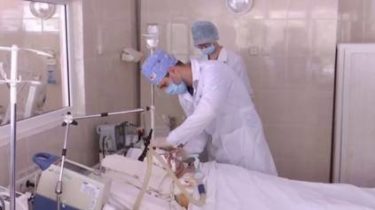 Father and daughter are in one piece in the Donetsk region.

In the river doctors are fighting for the lives of 48-year-old Nicholas, who was very seriously injured in Nikolskoye village of Donetsk region, according to TSN.16:45.

Military and daughter are in one piece. 26-year-old nurse has damaged hearing. Her life is no threat. But the father of surgery, he is now recovering after surgery.

“These wounds to the father. They are extremely complex. The hematoma is large. His body saved his daughter. We all believe that he will survive and do everything for this, so he got a second life. With such injuries, as a rule, death comes fast”, – said the chief doctor of the regional hospital. Mechnikov Sergey Ryzhenko.

Just over the weekend at the Regional hospital Mechnikov brought five wounded from the front. Two in critical condition in intensive care. 35-year-old Constantine a bullet pierced his head and stayed in the brain – threatening condition, while it is impossible to operate, a soldier in a coma.